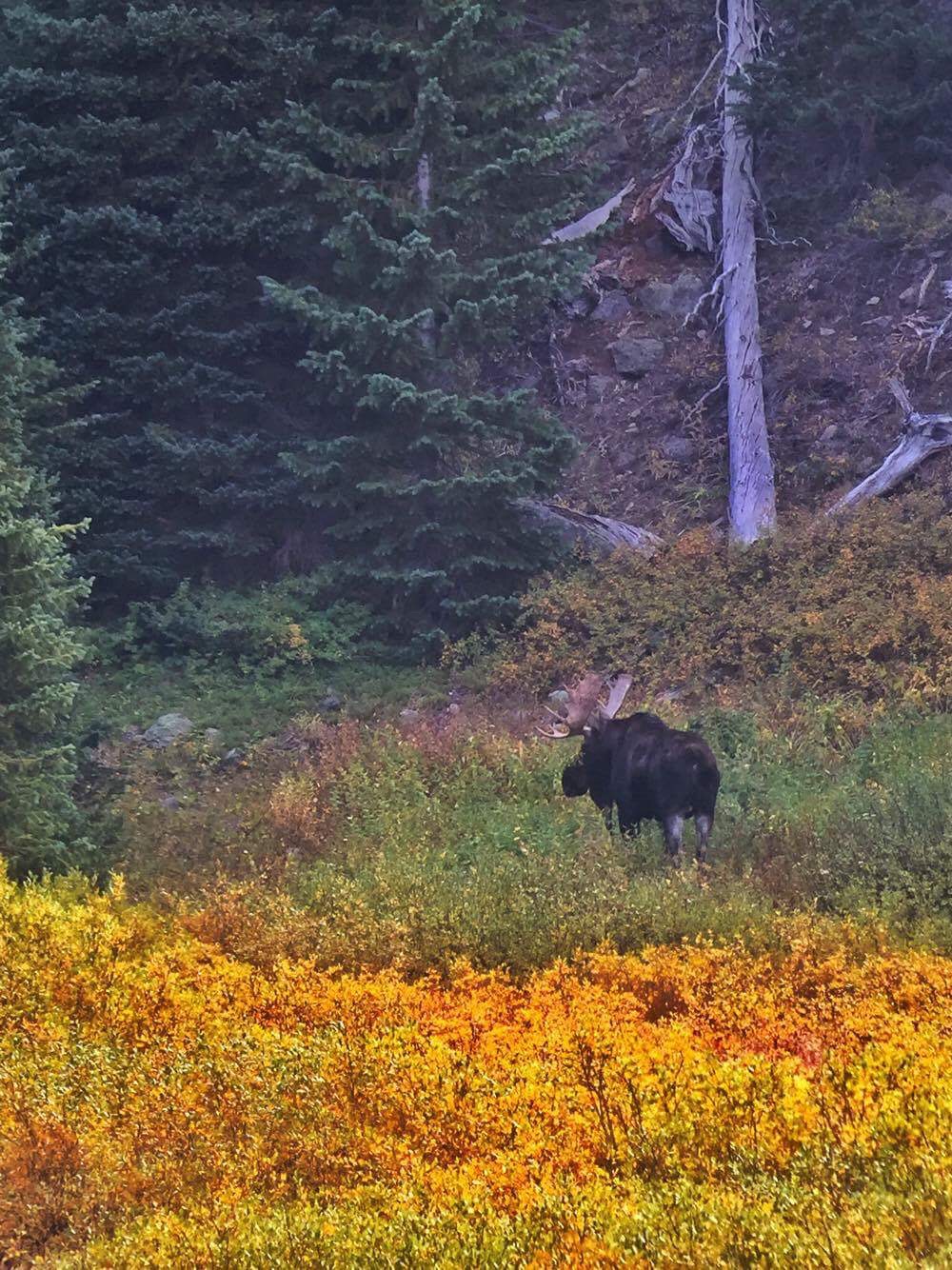 Moose are not the easiest species to field judge, being more difficult than elk and deer. I think the reason for this is that most folks don’t get near as much practice and don’t understand how they are officially scored. Seeing deer or elk is so much more common. Obviously, if you were talking to a resident of Alaska they may think an elk would be more difficult to judge. Finding a field judging manual for Shiras moose seem to be harder to find than their larger cousin the Alaska-Yukon moose. In general, the Shiras moose is smaller in antler growth and body size.

The minimum score for entering a Shiras moose in the Boone and Crockett Club is 140” you can see their scoring system here. A moose tag is a once in a lifetime tag in a lot of the lower 48 states so any legal bull should be considered a trophy! However, who doesn’t want to shoot the biggest and oldest animal in the area? To help you determine if the moose you are looking at is a “book” size moose, I hope this helps.

The first thing I look at is also one of the easiest, count the number of brow tines. It is very uncommon for a Shiras moose to hit the 140” book mark if the bull does not have multiple brow tines. The number of brow tines doesn’t increase the score by much but it’s an indicator of good things to come in terms of overall score. So, if the bull has a total of 5 brow tines that are all 5 inches long it actually only counts as 5 additional inches to the total score of the animal. One brow tine equals one inch. I count brows first because moose that put on a lot of other antler growth tend to grow multiple brows. Second, given the B&C scoring system, there is a big difference between moose with one brow tine and two when it comes to measure the length of the paddle (described later). Shiras moose are less likely to grow as many brows as their larger cousins. A really big bull may have 3 brows on one side. 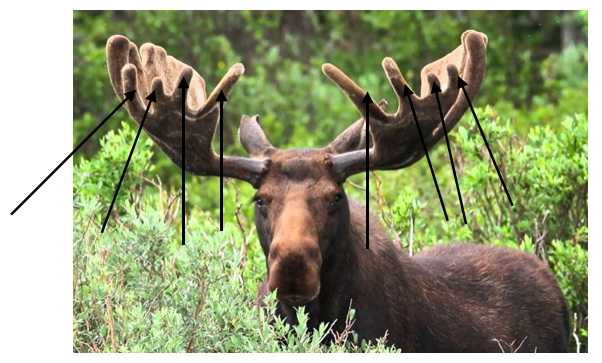 This bull has 8 brow tines.

The next thing I look at is the second easiest, which is count the total number of points. This can be very difficult at long ranges even with the best glass around. Each point doesn’t affect the total score much either as one point equals one inch just like the brow tines. Again, just like with brow tines, larger moose tend to have lots of points. 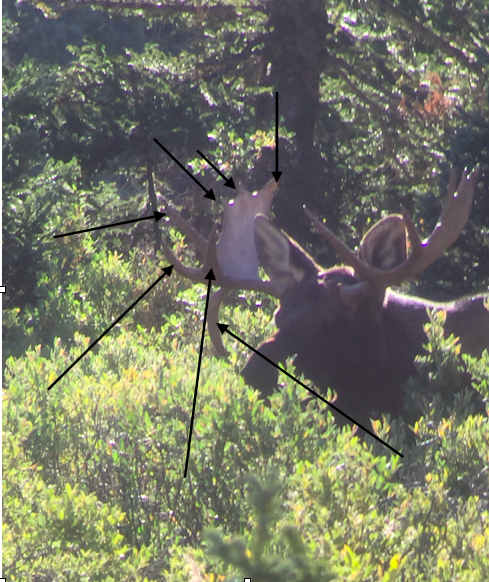 This bull has 7 score-able points on his right side. However, the drop tine would count as negative inches to a typical moose.

The next thing I look at is what moose are famous for, their spread. Whitetail hunters often ask how many points he was, elk hunters ask what did he score, and moose hunters ask how wide was he? Spread makes up for the largest single measurement, typically. In Shiras moose, hitting the 50” mark is equivalent to a 30” wide mule deer or a 70” Alasaka-Yukon moose. Determining spread is a guessing situation that you should use whole numbers to estimate. The hunters that say they saw a 52.5” moose is probably full of it! I often times just estimate in increments of 2” (40”, 42”, 44”, etc) or sometimes in increments of 5” (40”, 45”, 50”, etc). Judging the amount of inches from a distance is tough but if you have something to use as a reference it puts you in a better spot.

When judging the spread of a bull moose we have a couple different references to base the width off of. We may never get the perfect view but always have something to work with. The first is the length of his ears. A mature Shiras bull’s ears are about 8” long. So we can use that reference and add up ear lengths. 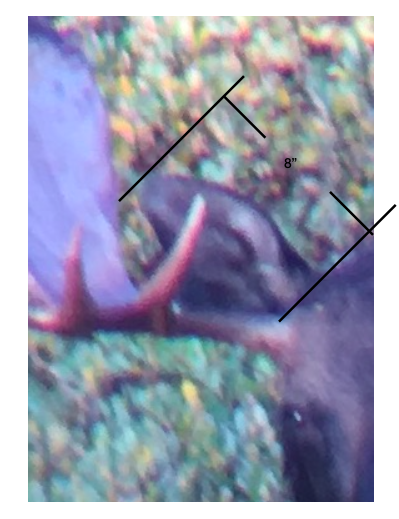 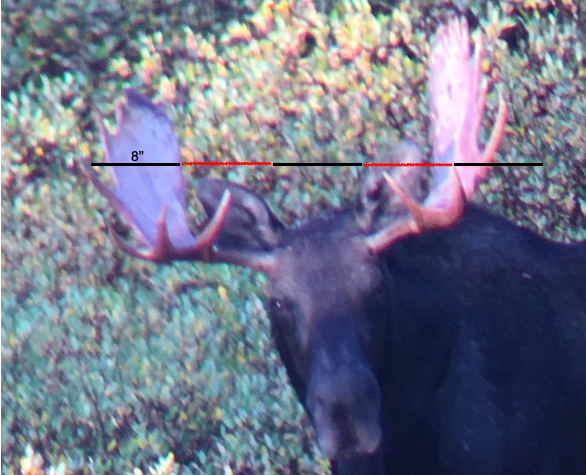 Because this moose is not perfectly square looking at us this will throw our measurements off slightly.

My best guess is that this moose is 32”.

Another way to determine spread is when a bull’s ears are laying “flat” out (so basically horizontal to the ground that tip of right ear to the tip of the left ear is about 26”. This is a very common way of judging width however I find that animals do not lay their ears flat out as often as you may think. They usually have their ear perked up and constantly moving so pick up what is going on around them.

Most Shiras Moose that make Boone and Crockett will be at least 45” wide. 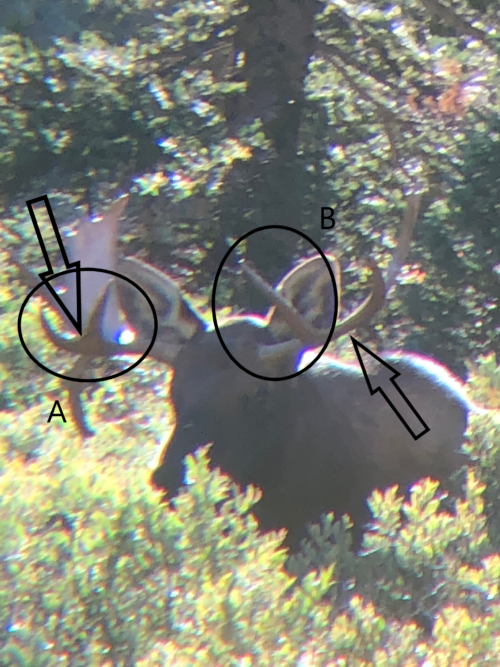 Arrows on the above picture show where the bottom of the paddle would be on the length measurements. You can see that the (A) paddle will be considerably longer than (B) soley because the (A) side has two brow tines while (B) only has one. 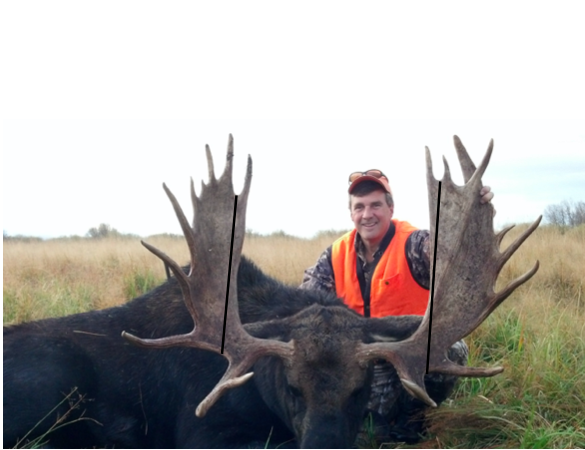 Here again you can see above that the bull’s left paddle ends up being measured longer strictly because there are two brow tines instead of one, like the bull’s right paddle. 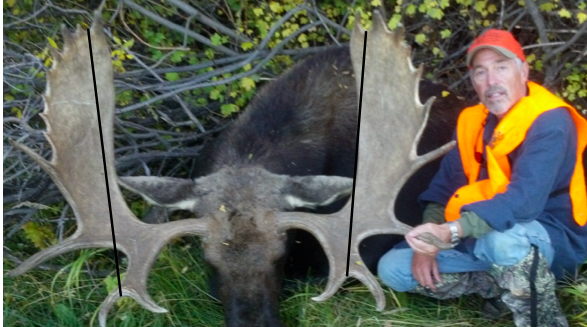 This above bull gets to maximize paddle length on both sides due to the double brow tine configuration on both sides. If one side only had one brow, the length measurement would be significantly lower.

At the end of the day, these are the 4 signs I look at when judging a moose. There is the width of the palm and the basal circumference of the antler that also go into the official score of the moose but in my onion they are negligible. The key take away for shooting a Boone and Crocket bull is that a 40” wide bull with multiple brow tines will most likely score higher than a 50 wide bull with single brows.

This additional length to the palm measurement can add 15-30 inches to the total score in no time. If you look for a bull with at least 9 points on both sides, multiple brow tines, over 30” palms, and over 43” wide, there is a great chance that bull will make the book!