As you will see below, we had some awesome fishing adventures in 2019!

If you wish to book a single day fishing trip from the ranch via horses, 4-day wilderness fishing trip, or 3-day lodge fishing trip please get in contact with us at Booking@FTGuides.com or 970-343-4460 to get on the calendar.

We currently have scattered availability from June 10th through August. 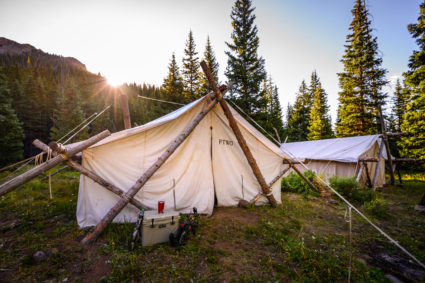 With nearly a 150% above median snow-pack last winter, the fishing in the Flat Tops was delayed by close to two weeks. Most of our bodies of fishable water were inaccessible until mid June. However, this made for great fishing in July and August. Typically, August fishing in the high alpine creeks is still decent with crystal clear moving water, but 2019 was phenomenal to say the least. 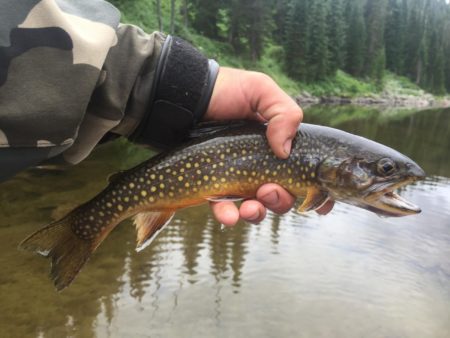 We spent this month clearing the trails of down trees to our favorite bodies of water and getting our horses and mules back into working shape after the long winter. The wildlife seemed to be everywhere! It was not unusual to see 30 plus elk, multiple bears, and deer browsing along the trail. We did our first fishing trip the second week of June to one of the lakes, right at 10,000 feet. 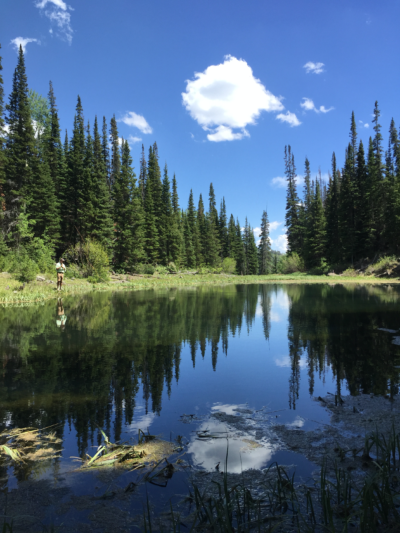 The fish were lethargic due to the cold water temperature. There were not many bugs coming off the water so the dry fly bite was slow. We switched up tactics and tied on size 6 woolly buggers with a little bit of flashabou and stripped them in with short quick strips, followed by letting the fly sink. Nearly every cast had fish chasing or taking the fly with aggressive strikes. This seemed to be the most productive strategy for the rest of the month. 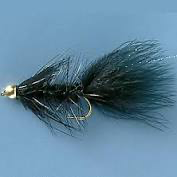 Shortly after our first trip, we were contacted by one of the local fly shops we work with to take a writer from the Denver Life magazine into the high country for an experience most folks never get. We had a blast! Again, woolly buggers were the ticket.

Check out the article from Denver Life:

Fly Fishing with a Twist

The first week of the month started with one of our multi-day lodge based trips. The wildlife still seemed to be everywhere and the blown out creeks were steadily lowering. We fished one of our favorite cutthroat lakes with success on dry flies. 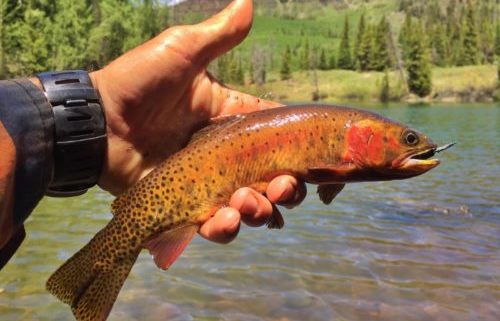 As per usual, elk hair caddis seemed to be their favorite. Fishing cone head zuddlers and royal Wulffs were also productive. The streams we fished that week were still high, muddy, and moving fast but fish could be caught nymphing and throwing streamers. In stretches where the stream formed an oxbow there was success to be had fishing dry flies. 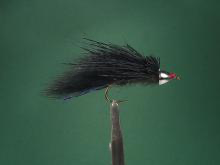 For 4th of July, one of the staff members and myself rode to the top to see if we could reach one of our camps. After “busting” 5 foot snow drifts through the timber we got to the top, still snow covered. 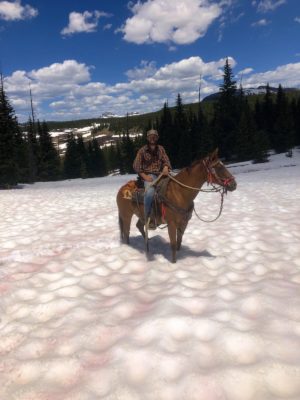 July was also our first opportunity to fish on the other side of the mountain, in the Derby. Our first multi-night wilderness trip over there was a blast.

We had 7 great guys that live all over the country, but went to high school together. Their fly fishing abilities varied from advanced all the way to first timers, and some them preferred sitting along the banks talking trash to their buddies rather than fishing. We fished lakes and streams with tremendous success. 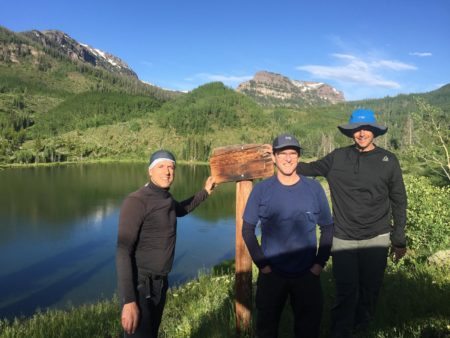 The typical dry flies worked flawlessly and the large terrestrials, such as hoppers, were getting sipped off the surface. The last day I led 4 of the 7 fisherman to a remote lake in search of trophy cutthroat. The lake still had some ice floating in it and some of the snow drifts were as tall as we are. The views were amazing before a thunder storm rolled in and we had to hunker down. The fisherman were more interested in taking pictures and exploring rather than fishing. Overall the first trip in the Derby was unforgettable! 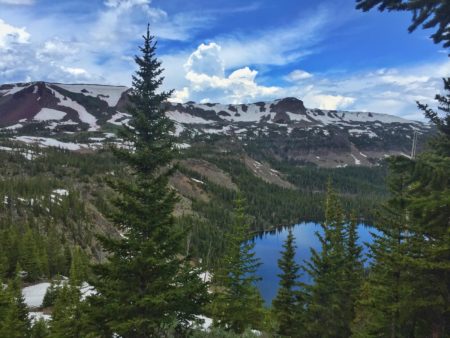 The rest of the month was filled with more enjoyable day trips, multi-day lodge trips, and multi-day wilderness trips. By mid July the terrestrial bite seemed to be the most productive. The larger and brighter the fly, the better they worked. The wildflowers were more brilliant and abundant then any other year I’ve witnessed. 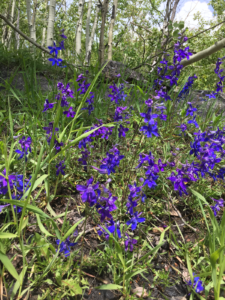 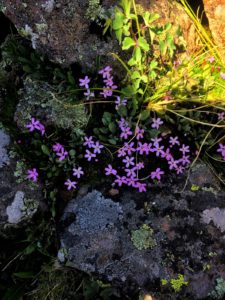 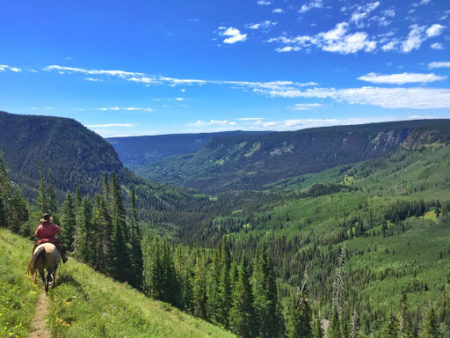 As summer progressed we had a few more multi-day wilderness trips and multi-day lodge trips. The day fishing trips were a big hit with folks vacationing and doing a spur of the moment fishing trip.

As anglers walked the banks of the streams and lakes, grasshoppers jumped to get out of the way. In turn, the fly of choice were large bright hoppers. The elk had moved to the top of the mountains to get away from the insects. Deer could still be seen regularly along the trails. The fishing was easy and we never had an angler get skunked. 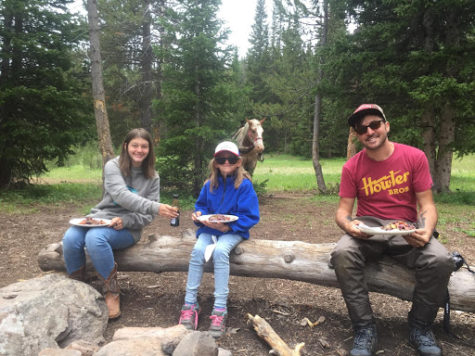 Although all fishing trips a lot of fun, a couple really stick out. The most memorable was a father and his two daughters from Arkansas. The father is an avid fly fisherman, the oldest daughter not into fishing at all but loves horses, and the youngest daughter was into fishing and horses. I took the youngest daughter under my wing and first cast caught a nice Brookie. After about 10 fish, she was content to just hang back with her sister and pet the horses. 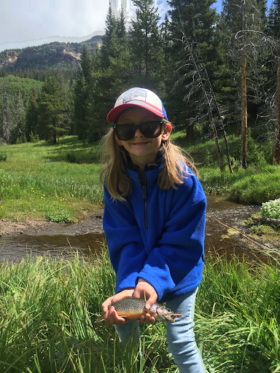 A couple other memorable moments in August:
1. The first rainbow I’ve caught in the Flat Tops. We were over 15 miles from the Colorado River, the closest spot to where rainbows have been introduced.
2. Catching my first cutbow, ever. 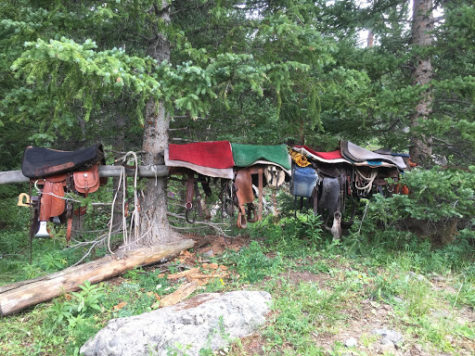 Jimmy grew up in Pennsylvania hunting and fishing with his father and grandfather at a young age. He has spent several seasons on privately owned ranches in Texas guiding deer and exotic hunts. Jimmy also spent a summer in Alaska working for a salmon aquaculture company. In recent years he has spent his falls guiding in Colorado for elk, mule deer, black bear, bighorn sheep and mountain goats. He has also traveled to British Columbia with hunters for grizzly and to “The Dark Continent” where the African wildlife, culture, and beauty has captured his love for adventure.