The Right Plan – Elk Hunting in The Flat Tops

With winter time cabin fever setting in, my maps and GPS are laying on the table as I plan future scouting trips. The words “ELK-14” and “SPOTTED FROM-14” (my way of keeping track of waypoints) bring back memories. I had been off the mountain for less than 24 hours and was headed back up for a second season elk/mule-deer hunt. It had been an unusually warm rifle season in the Flat Tops Wilderness, and there was no change in the forecast. I was guiding a gentleman named Saeed, from Kentucky, on his first elk hunt. 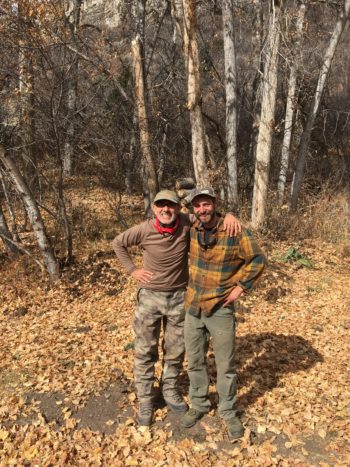 Saeed pulled into the pack station to unload his vehicle and get it packed on the horses and mules. Within minutes we were headed up the trail to camp. The first evening was spent glassing a hillside in preparation for the opener the following morning. After glassing up a handful of does, a couple of smaller bucks, and a black bear, I planned an easy first day of hunting closer to camp to help adjust to the altitude for Saeed (we had set camp at 10,000’ and planned on hunting up to 11,500’). 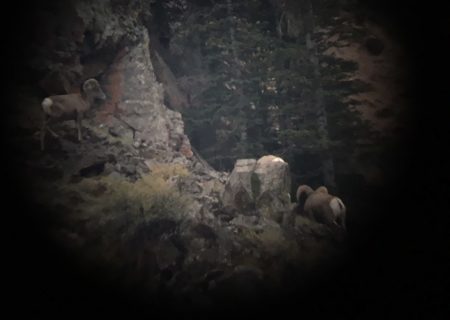 The first day of hunting was slow, only a couple of does spotted. Nevertheless, Zach, our camp cook always knows how to raise spirits with his chicken fried chicken, spice cake, and a toasty cook tent. The following morning, I was up at 3:30 to start saddling Snowball and Brownie (our riding horses), Red’s pack saddle properly fitted (our pack mule), and get them fed/watered before heading out. I was headed to Saeed’s tent by 4:30 to make sure he was up for breakfast. With eggs, bacon, and an unhealthy amount of coffee in our system, Saeed and I hit the trail an hour before daylight to make the 6 mile ride to the top of the mountain. Saeed had both a bull tag and a buck tag, and I had seen a few elk on the top of the mountain first season and one gigantic muley! With the horses tied up, and saddles loosened Saeed and I were off. We got to where I thought for sure that big muley was living and sure enough, he wasn’t there. 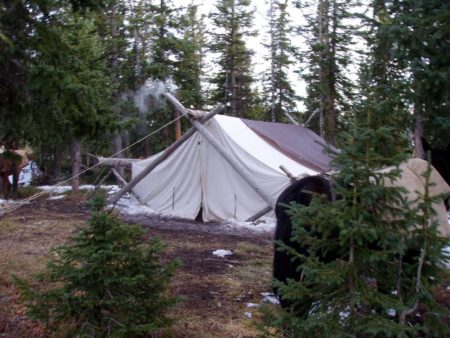 Saeed pulled out his Jetboil to make some coffee and tea for us while I pulled out by binoculars to glass the surrounding mountain sides. From our vantage point we could see country that was so far it would’t even be able to hunt. I immediately caught glimpse of three very large Rocky Mountain Bighorns on the adjacent mountain. While looking at the rams, I caught a flicker of movement on the mountain behind the rams. With closer inspection, it was indeed the target species of Saeed’s hunt, elk. There was not just one but closer to fifty. A mix of cows, calves, small bulls, and one very large bull. I pulled out my GPS to try to pinpoint exactly where they were from our location and how we could get to them. As it turned out, the herd of elk were 2.2 miles from us the way the crow flies.

It was too late in the day to make the hike back to the horses and ride what I figured to be around four or five miles to get to the herd. So we decided to watch them and see what they did. After about an hour of watching the herd, the three rams, and enjoying our hot coffee/tea, the herd slowly disappeared into the timber to bed down. I decided our best bet would be to head back to the horses and make our way back to camp and go after the elk early the following morning. Though it was still somewhat early to call it a day I knew Saeed and the horses would need all the rest they could get for the following mornings hunt.
Saeed and I made it back to camp a couple of hours before sunset. Saeed enjoyed the warmth of the fire pit and the bold flavor of his favorite cigars while I unsaddled and helped Zach with some camp chores.

At dinner that night, I told the other guides and hunters about the herd of elk we had seen. Bobby, one of the other hunters in camp had a cow tag and his father had harvested a nice bull on the first day of the season. I told Evan, Bobby’s guide, that they would be more than welcome to tag along with Saeed and I in the morning to go after the big herd I had spotted. Surely, if the elk are still there and Saeed shoots a bull, Bobby would be able to get a crack at a cow before they all ran off. The plan was set!

The following morning we were up earlier than usual for our long ride. Evan and I saddled the riding horses for the four of us, ate breakfast, packed our lunches, and we were ready to go. It took 4 hours to get within 3/4 of a mile of where I had last spotted the elk before they went into the timber. We tied up the horses and ate a little snack before closing the last little distance. That walk seemed to take forever. Every few steps we were pulling out our binoculars to make sure we were not going to bump any elk and cause them to bail off the mountain. 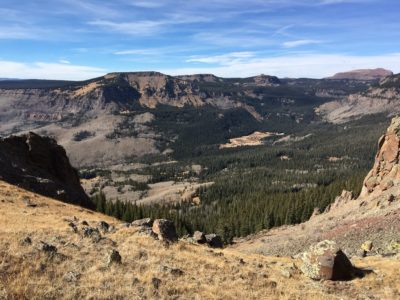 When we finally made it to the bowl that the elk were in, I was disappointed. Yesterday it was the garden of Eden, elk everywhere; now I didn’t see any with my naked eye. Within a few seconds after looking through the binoculars a bull was spotted bedded down on the far side of the bowl, just shy of 700 yards. Cows started to appear left and right much closer and we could see bulls meandering through the thick dark timber. Where we were, to the closest elk was 400 yards. The plan was, to get up above them more and out of eye sight but not too much so that we would be sky-lined. From there, we had a fifty yard stretch of loose rock on the hillside that at the time seemed almost impossible to cross without accidentally knocking a rock loose alerting every elk in the area that we were there. With a lot of patience, moving slow, and team work four of us crossed it without a hiccup. 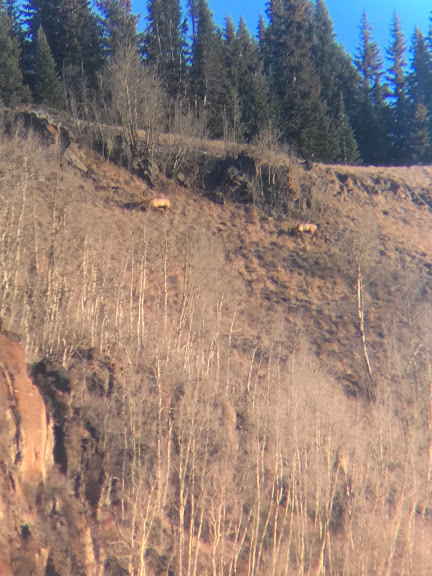 We were finally in position on a little bench on the hillside, just big enough for the four of us. There were several cows bedded down, but we had agreed that Saeed would shoot first at a bull, and then Bobby could shoot at a cow. With the binoculars up, I told Saeed a bull was making his way through the timber and to get ready. I ranged an opening at 204 yards that I thought he would come to. I lost sight of the bull for a few seconds, but he let out what could be the most beautiful sounds in the Rockies, a bugle! At this point, Saeed went from being calm and collected to a little excited and shaky to say the least. I leaned over and told him to put the rifle down for a second, look at me, and take some deep breaths. Seconds later I caught movement through the timber. It was the same bull. Saeed, now more calm, pulled his rifle up. I whispered to him to take the safety off and prepare to take a clear shot. As the bull breaks through the clearing, Saeed shoots and the bull starts running. Almost instantly Bobby takes a shot. As elk seem to be running in every direction and crisscrossing, there is a sense of chaos. Evan and I are telling our hunters to reload and to keep the elk they shot at in their scopes. As the elk are running through the timber, it is hard to know exactly which animals had been shot at. To prevent accidentally shooting the wrong elk, thinking that it’s the one you already shot, I told Saeed and Bobby to put their rifles on safe. There just wasn’t another shot.

Before heading down to look for blood, the four of us sat there in amazement with the task we just pulled off. Saeed pulled out a cigar in celebration and talk of how he is going to mount the bull begins to be tossed around. He said he is confident with his shot and his 300 Winchester short magnum has never left him down. However, looking through the binoculars when he shot, the bull didn’t seem to react as though he was hit.

After about 30 minutes, we made our way down to where the elk were and set down our packs. Evan and I were out front with Saeed and Bobby right behind us. When we got to the opening that Saeed and Bobby both shot at elk in we were amazed to see nothing but tracks. There was a little bit of snow on the ground in spots which helped us see exactly where the elk were standing. There was no blood. It was a shocker to all of us. How could they feel so confident with their shot… with 200 yards was right in their wheel house? The next several hours the four of us gridded the entire bowl and never found any sign of a wounded elk.

With spirits at an all time low, it was going to be a long ride back to camp. We made the hike back to the horses and jumped on. There was only about an hour and a half before dark and we had a long way to go. The last two hours of the ride were done in complete darkness. We made it back to camp around 10 pm where Zach and the other hunters in camp were staying up waiting for us to arrive. When we got back into camp, Saeed could barely move from all those hours in the saddle. Zach put our cold smoked ribeyes on the fire for dinner and heated up the sides as we told the story of the day. 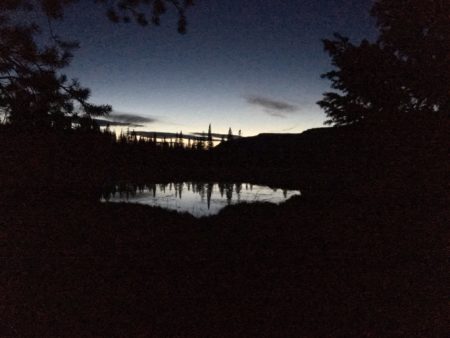 The next two days we hunted close to camp, still sore from our long horse back ride. Saeed never had another opportunity at an elk but passed on some smaller mule deer. Everyone in camp either shot, missed a shot, or passed on an animal that season. Each day we laughed and talked about our big adventure. Though unsuccessful at bagging an animal, the day was a success and one that I will remember forever.

You can have the right plan, but there’s no guarantee it will produce!

Jimmy grew up in Pennsylvania hunting with his father and grandfather at a very young age. He has worked on two privately owned ranches in Texas guiding deer and exotic hunts. Jimmy spent a summer in Alaska working for a salmon aquaculture company. He most recently has spent his falls guiding in Colorado for elk, mule deer, black bear, and mountain goats. He has also traveled to British Columbia with hunters for grizzly and to “The Dark Continent” where the African wildlife, culture, and beauty has captured his love for adventure.