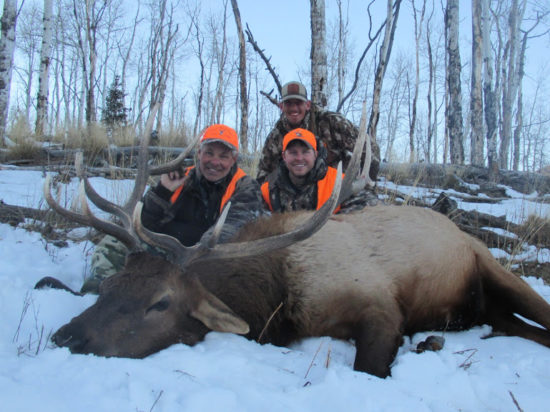 In the early part of the 20th century, author Zane Grey spent several weeks in the Colorado mountains. He hunted, fished and explored the wild alpine now known as the Flat Tops Wilderness Area. Much like today’s hunters, Grey set out on horseback in search of black bear, mule deer, elk, cutthroat trout and adventure. He found game in abundance and more adventure than he could shake a stick at. But what inspired him most was the sheer vastness of the Flat Tops landscape. He called it a place of “limitless space.” 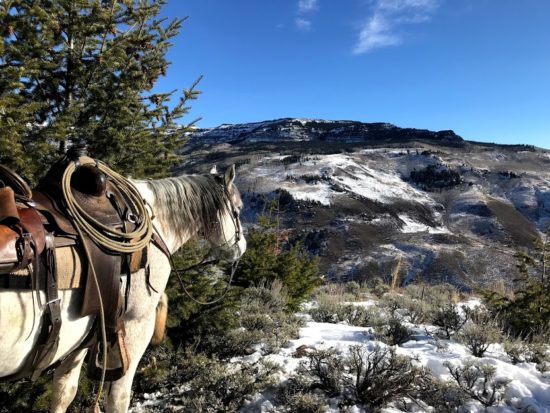 I was raised in the shadow of these limitless mountains, and for the past four years I’ve guided hunts here for outfitter, Cliff Gray, of Flat Tops Wilderness Guides. We specialize in horseback wilderness hunting trips from traditional canvas wall tents. Gear and hunters are shuttled via horse and mule to remote camps. In the later rifle seasons, when winter closes its grip on the high country, we also guide lodge hunts from Cliff’s immaculate base camp — riding to and from our hunting grounds in darkness.

It was on one of these mid-November lodge hunts that I had the pleasure of pairing up with JV and Jess Hawthorne, a father-son-duo. The Hawthornes were no greenhorns. They had broad and varied hunting experiences ranging from African plains game to Kaibab mule deer and Wyoming pronghorns. After introductions at the lodge, Jess pulled me aside and said, “Listen: This hunt is all about my dad. It would be awesome if he killed a big bull elk on this trip.” Moments later, JV looked me over squarely and said, “Listen: This hunt is all about my son. He’s had a five-year tag soup streak. I’d love to see him kill a nice buck or bull.” I chuckled at their concern for each other and began to really like these guys for their humble selflessness. 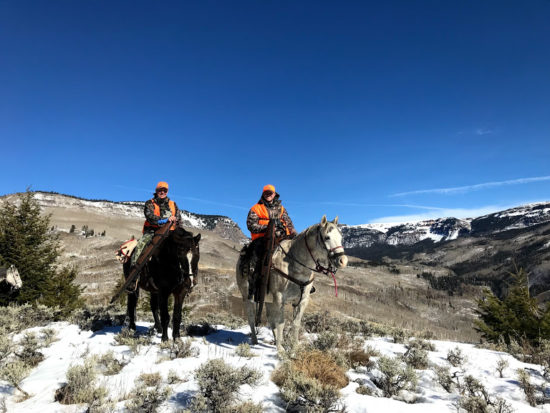 We started our first morning well before dawn: guns in scabbards, packs in panniers, butts in saddles. The horses lined out on the trail, picking their way through rock and snow and frozen mud as we switchbacked up from the valley floor towards a favorite glassing perch. At gray light, we dismounted, set our tripods and began the search.

Unfortunately, our first day resulted in nothing but cold toes and some good long-distance wildlife watching. The only elk we saw were small cow-calf bands and one lone bull two miles away at dusk. With the mule deer rut ramping up, young neck-swollen bucks were plentiful. But Jess was aware of how special a 4th Season Colorado deer hunt can be and was fully committed to waiting out a mature buck. Right at dusk a heavy, tall, dark-horned typical slipped out of the timber and made a beeline down the drainage across from us. We slid and skidded off the snowy slope after him, but darkness beat us there.

The next morning found us on the other side of the valley with a new vantage. We hoped to be within fighting distance of the previous evening’s bull and buck. On our ride in we “John Wayned” our way through a herd of mulies in an open meadow: dismounting our horses rapidly and peeling steel from leather. A wide-framed 4×4 buck with a three inch kicker stared dumbly at us from 75 yards in a rut-drunken stupor. After some inspection, Jess decided to count coup on him and save his tag for something bigger — earning some serious respect from the guide! 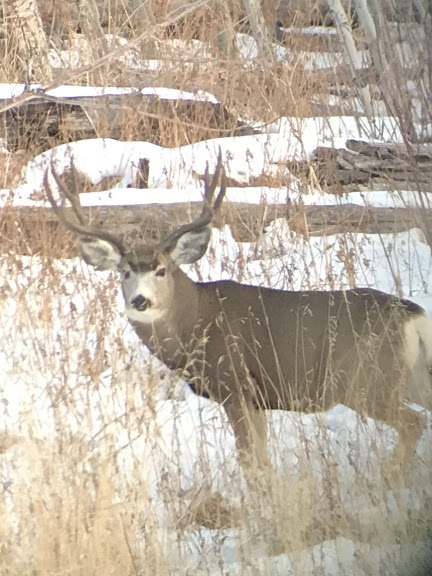 After unpacking the optics and hunkering down at our intended location, we were disappointed to find nothing but cows and calves in the same old predictable spots. Later in the morning we expanded our search to include a few distant canyons that we hadn’t yet focused on. At nine o’clock, when all hope seemed lost and our attention had shifted to our snack food, I picked out what I thought might be a bedded bull in my binos a mile or two away. I reluctantly told the guys that I thought I saw a bull (I’m usually wrong) but needed the spotting scope to confirm. Sure enough, it was a solitary 6X6 laid up in a classic late-season bull location: steep rimrock and timber country miles from the nearest trailhead.

We set into motion an elaborate plan of attack that included sixteen total miles of riding, two miles of trailering horses, a half mile of walking, and a wing-and-a-prayer. As we started the trek, Jess reminded me that he REALLY wanted his dad to get this bull! Luckily, six hours later, JV and I crept over a spruce covered knob to find the bull out feeding in the aspens just a few hundred yards from his bed. “There’s your bull,” I said. JV nestled his pack down on a log, eased into the scope, took a breath and stoned the bull in his tracks with a beautiful high shoulder shot. One more round put him to rest and we hugged each other in exhausted triumph. I invited, “Go get your bull, man!” But to my delight, he said he’d rather wait for his boy so they could share the moment together. I jogged back up to collect the horses and an overly excited Jess who was jumping and fist-pumping like a lunatic at the sound of the shots. 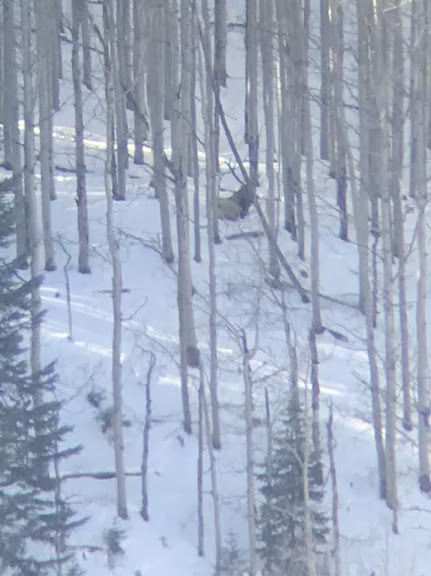 Watching a father and son celebrate a successful hunt is intensely rewarding. There is an expression of raw genuine emotion that is unmatched elsewhere in this world. As Jess and JV hugged each other and ran their hands over the shaggy chocolate mane and pine darkened antlers of this wilderness giant, I couldn’t stop smiling. I was so grateful to be in the moment with them. It makes me hunger for the day when I can take my own children (just babies now) out into the hills with me.

As we skinned and quartered, JV leaned into Jess with a half-cocked smile and said, “Now it’s your turn, bud!”

On the fourth day of hunting, we returned to the same windswept mound we had started the week on. I put Jess in charge of watching the short distance deer country with his 10X binos. I scanned long distance stuff with the spotter. A tagged-out JV, now my co-guide, filled in the gaps with his tripod-mounted 12s. Every couple of minutes, Jess would say, “Got some new deer,” and I would swing around to inspect them with the scope. On one such occasion, I turned to check a group of five or six he had spotted in the sage flats below us. My eyes grew wide when I got a good profile of the buck. With his head down feeding, his back forks stretched out like daggers. “That’s a good buck, Jess. Come check him out!”

Jess approved, and together we bailed off the mountain with JV back on the spotter. A stiff breeze was ripping downhill and our only reasonable stalk would be a crosswind approach that left a sizeable draw between us and the buck. I didn’t know what sort of yardage we’d be dealing with, but I hoped it wouldn’t be too long.
When we finally crept out onto the brushy edge of the draw, the buck was not where we left him. I told Jess to be ready and he laid out on his pack and got comfortable for a shot. All at once, a doe tore violently from the sage and up a bald ridge 500 yards away. The buck was right on her trail, head thrown back and lips peeled. Our hearts sank because we assumed that we’d busted them. But to our surprise the doe circled right back, buck in tow. 450, 400, 350, 300. They weren’t spooked at all, he had just been chasing! At 320yds, Jess was able to find the buck broadside in his scope. I took one more range to be sure and told Jess to fire away when ready.

At the shot, the buck hurled forward and plunged into the sagebrush sea. His does filtered out single file. One perfectly placed heart shot had left him dead on his feet — piled up 20 yards from where he last stood. 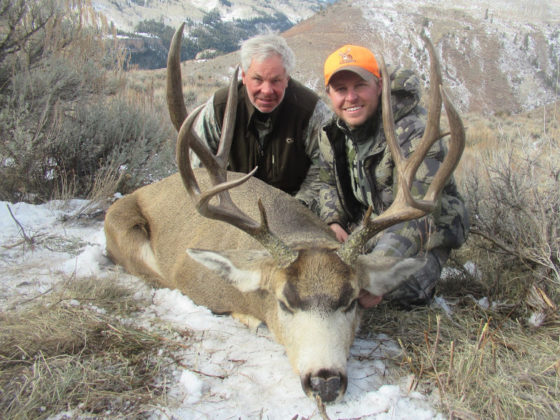 I was wrapped in yet another hearty Hawthorne hug! Jess exclaimed, “I can’t wait for Dad to see this buck! He’s gonna be so stoked!” Once again, I hoofed it up the hill to gather the horses. JV was waiting for me there, grinning from cheek to cheek — the epitome of a proud father.

As a guide, I get to spend time in the mountains with all kinds of hunters. Their motivations are as diverse as their backgrounds. Some hunt for meat. Some hunt for memories. Some for solitude. Some for ego. But far and away, the hunters with the purest intentions are those who don’t even hunt for themselves: They hunt for each other. JV and Jess Hawthorne are just that sort. I thank them sincerely for letting me be a part of their hunt.

A fifth generation Coloradan, Evan was raised on Sweetwater where he and his family own an adventure summer camp for children. The mountains have been his home, his playground and his sanctuary.

Prior to joining FTWG, Evan spent several successful seasons as a guide and packer for a Meeker-area outfitter. He also has worked as a fly fishing guide, a wildlife biology technician, a ranch hand and an oilfield laborer.

When he’s not chasing elk in the southern Flat Tops, Evan also enjoys fly fishing, rafting, wingshooting, and training horses. He is an accomplished team roper, and he and his new wife spend much of the summer traveling to rodeos and ropings throughout the West.