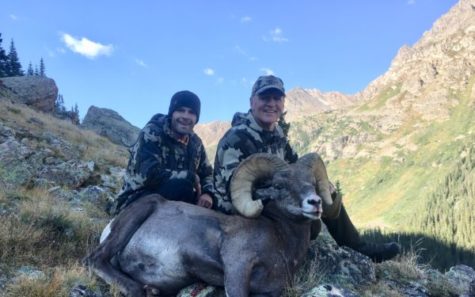 Please contact us at booking@ftguides.com if you are interested in booking a trip for 2020. With the great economy we have many early bookings, and want to make sure that our repeat clients get on the schedule.

We are also booking our Summer Horseback Wilderness and Fishing Trips. We will give past clients (hunting, fishing, or riding) 15% off all of our Summer Services if booked before March 15th. Hunters booked for this coming Fall can also take advantage of this offer. 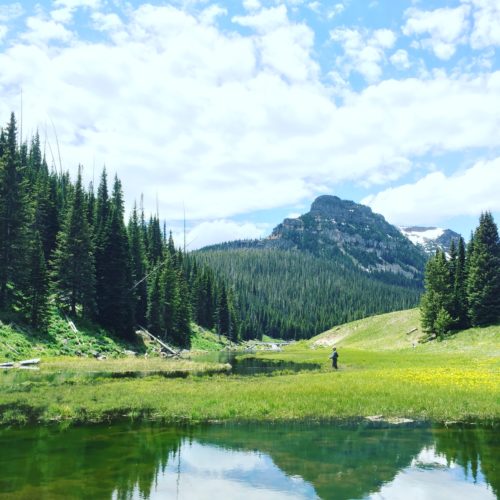 Coming out of Winter with a serious snowpack, the Summer of 2019 came 10-15 days later than typical up in the high country. We had prolonged runoff through mid-June with lingering patchy snow throughout Summer in the deer and elk calving country and Summer range. Range conditions were good throughout the mountains. The alpine’s short grasses were a little slow to start but grew well into the season, lower grasses were off the charts in terms of elk feed, and the browse put on new growth. These conditions were a great contrast to the poor growing season of 2018. The range conditions put our game species in great shape for the current Winter they are enduring.

From what I observed of elk/deer over the 2018/2019 Winter, I believe the elk herd came through mostly unscathed (other than the normal predation and attrition). However, we had more Winter kill in our deer herd than documented by our wildlife managers. The browse had minimal growth during the previous dry Summer and deep snows killed some of our deer. My guides and I saw a slightly lower deer density throughout the seasons this year.

Going into August and September, the moist conditions led to an overall above average berry crop. Service berry was fair, choke cherry dominated and the other bottom country bear feeds like Rose Hip were above average. On the other end of the bear feed spectrum, the oakbrush set well below average acorn quantity and size. The majority of mature sows we observed had this year’s den cubs, so it doesn’t look like the harsh 2018/2019 Winter affected the bears much. 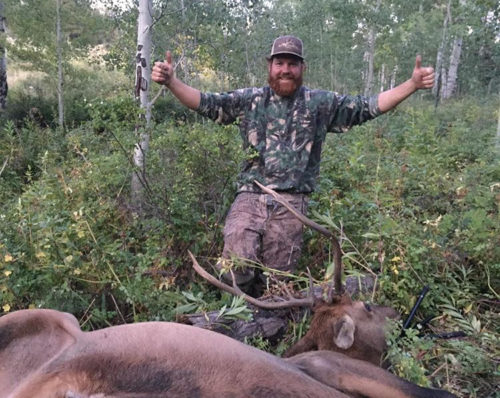 Due to feed across elevation grade, elk were dispersed throughout September. There was no “goto elevation”. Vocalization and rutting activity was above average, particularly for the first half of the season. Once you found the pockets of elk, they were talking and receptive to calling setups. The difficulty was in finding the small scattered groups. You could glass up two cows and a bull down below you at 8,500ft in the oakbbrush, and then turn around to glass up 2 bulls and 5 cows up at 11,700ft above timberline. This dispersion also meant you could go days without turning up a group. Persistence paid off for most of our drop camp hunters with most groups getting some opportunity and some nice bulls harvested. 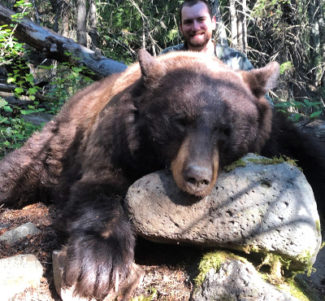 Bear hunting was focused on hunting bottoms, particularly choke cherry runs. Choke cherry is more difficult to hunt than oakbrush, not because it holds less bears but because the hunter and guides just can’t glass as much of it from one spot. It’s not uncommon to be able to glass miles of oakbrush while only being able to glass 600-700 yards of cherry. However, we still managed to get almost all of our guided bear hunters an opportunity to harvest a bear. Several hunters were even lucky enough to have multiple opportunities during our three day hunts from the lodge. We harvested some great color phase bears, too! 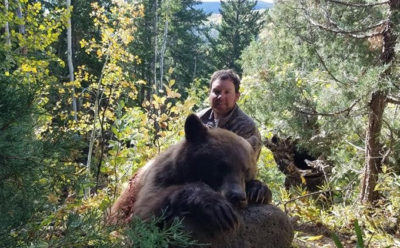 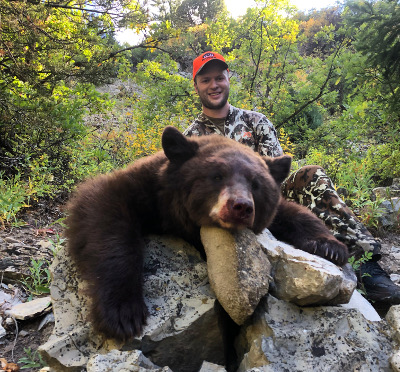 Bears are one of the few species doing great in Colorado right now. My guess is our 2020 bear hunting will be even better than 2019.

My guides and I enjoyed guiding some phenomonal sheep/goat hunts this year. Blessed with some great hunters in some of the units we know best, we successfully harvested many older age-class animals. I am almost certain that we harvested the oldest ram out of three of the units we guided in this year. 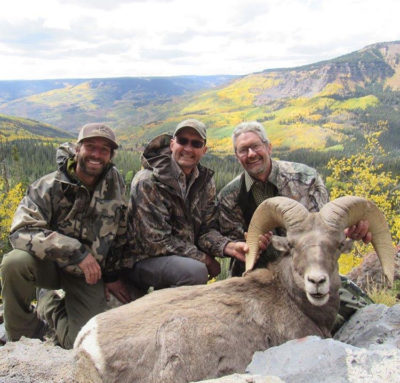 Sheep and goat hunting is still very good in many of Colorado’s units, but 2020 will be a year to keep tabs on. Several units are seeing a tag increase. On these species it pays off to be ahead of the informational curve. Some of the smaller units will produce a nice ram one year, and then not have a ram worth harvesting for several years. Keep a look out for our Sheep/Goat article that I will get out towards the end of February.

In sharp contrast to our 2018 rifle season when our guided camps produced close to 100% success, 2019 was the worst rifle season I have seen in over a decade. This observation was mirrored by many of my fellow outfitters across the state. We produced some great animals for persistent hunters, but there is no doubt that it was tough! 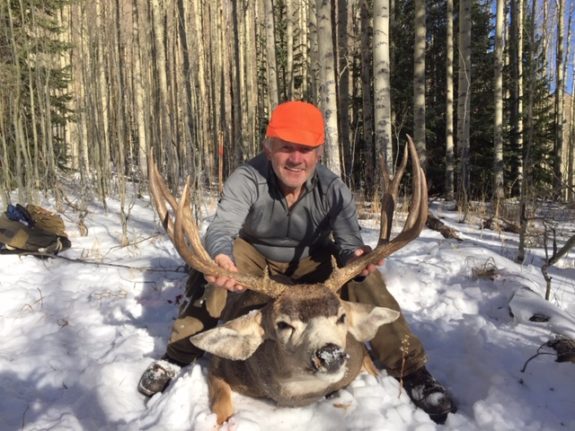 Success in the wilderness is a function of a myriad of variables, but I believe the following were the big factors in 2019:
1. Snow accumulation – Through November, we never had big enough snow accumulations to close up the higher elevation habitat to elk. We had a handful of small storms, but none put down game moving accumulations.
2. Feed conditions – Given the ideal range conditions, abundance of feed combined with a lack of snow cover meant the elk/deer could be anywhere, at any elevation. In a dry year, where the majority of the feed is in the Aspens, game will tend to move down elevation to the feed as temperatures drop and metabolisms mandate more fuel. We saw this effect in 2018, killing bulls in the early seasons down at low elevations due to no feed in the high country.
3. Temperatures – During 3rd and 4th seasons we had nighttime temps way above normal. While guiding during 4th season, I glassed up bucks bedded in conifers by 7:30AM. Without the need for additional feed to stay warm, game activity was well below average in these later seasons.
4. Herd health and previous year’s harvest –
Last year’s conditions were close to ideal during a couple of the rifle seasons, so many older age class animals were harvested. That harvest likely had some impact on the available game this year. The silver lining, of course, is that this year’s rough conditions left a lot of game on the mountain to grow for future years.

The other overarching challenge, as it relates to elk across Colorado, is a declining herd. With very little exception, elk herds across the state are declining and seeing some of the lowest cow/calf ratios in history. This doesn’t mean there aren’t elk to be hunted; after all, our White River herd is still the largest in the world. However, it means the density of elk in the habitat rich wilderness areas is getting more and more dispersed. Assuming that the very best habitat is going to consistently hold elk is no longer a sure bet. With so much good-to-great country available to a lower volume of elk, the elk have the upper hand. The historical variability in harvest due to weather and snow accumulation is becoming strikingly more volatile. If elk are not limited by snow and pushed to feed heavily due to low temperatures, without exception, hunting is a challenge. 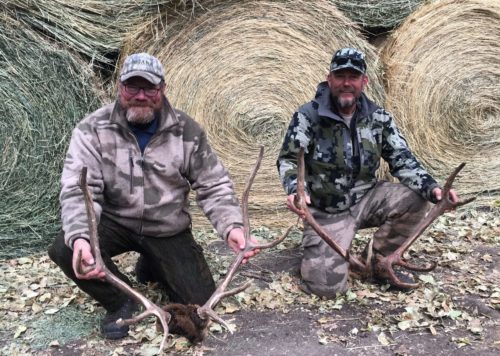 My guides and I are looking forward to chasing some of the bulls and bucks that made it through. Evan was able to get this picture of a couple phenomenal bulls during 4th rifle. Didn’t close the deal, but they will be there in 2020! 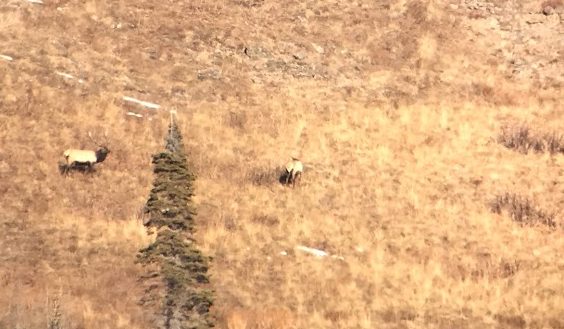