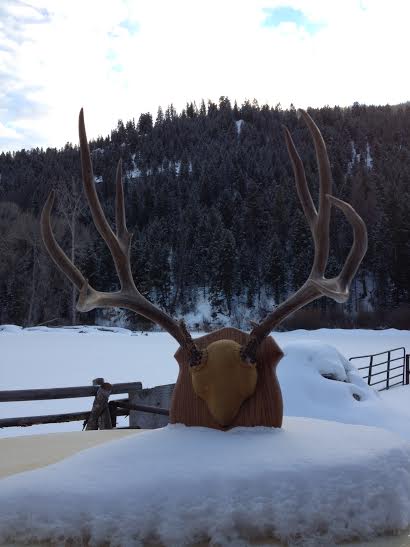 Do you really care if you can tell the difference between a 190″ and a 215″ deer? Me neither. In those situations, I just shoot it! It is more useful when hunting public land to know how to judge a 2-3 year old deer from a 4+ year old mature deer. This is usually the difference between a <145″ deer and a 160″+ deer. It’s not that easy to judge this difference when you are excited or don’t have much background looking at mulie bucks. This article walks you through the system I have developed to quickly field judge mule deer bucks in these situations.

I use Boone and Crockett’s scoring system as a framework. Scores don’t mean everything but they are incredibly useful for breaking things down to quick, useful metrics. We focus on easy to detect variables that are correlated to other positive antler characteristics. Those variables are first main beam mass, then main beam spread (inside spread), then brow tines, and last fork symmetry.

Particularly in long-range situations, first focus on the buck’s main beam. The main beam is the part of the antler that starts at the base and grows around towards the animals nose (F on the below B&C scoring picture). All other points are supported by the main beam and it will almost always be reflective of the rest of the rack. At long distances, too many folks get overwhelmed by the antler above the main beam, particularly if they are use to blacktail and whitetail. They strain to count points and judge the G2-G4 tines. Don’t do that or you will shoot young bucks. You will crank your spotting scope to the max and that deer is going to eventually look big and mature. With your naked eye, how far does the thickness in the base of the horns go out along the main beam? On smaller bucks, from 200 yards away, you will only be able to see 5-10 inches of antler. Any mass that exists, dissipates quickly. It can be hard to distinguish the main beam from the ears. On 160″+ deer you will be able to make out the main beam all the way until the end and it won’t look like it loses a ton of mass over the length. Deer with strongly visible beams are almost always carrying a 4×4 or better rack, unless they are just genetic derelicts. Next crank your optics down on the animal and check the main beam spread (“Inside Spread”, D in the below B&C picture) relative to the animals ears. We want an animal that has an inside spread that is beyond the buck’s ears. This equates to an inside spread of 19-23″. Heavy beamed deer with this width hardly ever score below 160″ and they turn out to be great trophies. Even bucks with tall genetics will be a little past their ears when they are mature. We are assuming the ears are in the normal position which is forward and cocked slightly upward. The first deer photo below is a good example of this common position. Do not get fooled by deer that are running away. They typically hold their ears close together as they depart, giving the impression of wider antlers.

Let’t take a look at a couple bucks: This local deer is on the border, but he doesn’t quite make the cut using our metrics so far. His inside spread is 1-2″ wider than his ears, but when you focus on this deer from a distance, the first thing you will notice is that he lacks mass. You will be able to make out his main beam just until it branches, 8-9″ from the base. His lack of a solid 4×4 rack and low overall mass is expected given his weak main beams. He probably scores around 135-145″ now, but will be a great deer in 1-2 years. This deer, courtesy of Wikipedia, has a similar inside spread, but he has much heavier main beams. At 200 yards, you are going to be able to make out the curved main beam from base to end with your naked eye. Ignoring the back two abnormal points, this deer is going to score around 185″+ and is clearly a mature mulie.

At this point, you have three metrics that you can solely use to determine if a buck is a mature, 160″+ deer, in 95% of cases. If a Colorado buck has a 20″+ inside spread, heavy main beams, and symmetric brow tines he will almost certainly score 160″ or better. That’s right, I don’t even have to look at his forks….but I’ll do it anyways to make everyone happy.

Most mule deer scoring discussions start with the forks. It’s important they are deep, aren’t “crab claws”, the back fork is tall, etc… The problem is one of having no reference point. I will illustrate by example. This buck has nice, wide, well-developed and equal front-to-back forks. If you got on to this buck with a spotting scope and zoomed in on the top of his rack, it would be easy to call him a 165″+ plus deer. The reality is, although he is a really pretty deer, I scored him at only 149 1/8″. The missing piece when field judging based on forks is a known variable. If we added in a set of deer ears that we know are around 21″ wide and checked them against his main beam, we would see that the inside spread of this deer is less than 17″. Now everything comes into perspective, including his forks.

The other problem with focusing on forks is that forks will look short or even crab claw on heavier antlered bucks. Take a look at the buck I’m holding below. It appears that this deer has similar length forks as the deer above. The measured reality is 70-80% deeper forks. Even the back right fork is larger than any of the forks on the other buck. The visual similarity is the illusion created by the difference in mass between the racks. I scored this buck as 179″. Hard to believe until you look at the bucks together: After all that negative chatter about using forks to field judge, I will say that asymmetric forks, front-to-back, is one of the best ways to disqualify deer from being shooters. Rarely a trophy class deer has crab claw front forks and nice back forks. They have to have stunning mass for this not to be the case. In the life span of bucks, they usually go through a couple youthful years of having one set of small forks against a larger set. In our area, the back forks are much wider than front forks on young bucks. It is an easy way to classify deer in the <140″ range. Just keep in mind I am talking about extreme differences. The better forks will look 3-4x wider/deeper than the poorer set.

Hope this helps you pick out a slammer on your next DIY, Drop Camp or Guided western mule deer hunt!